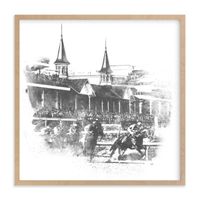 Murder Mystery! MURDER IN THE HOMESTRETCH

Just weeks before the running of the prestigious Dairyland Derby, a fire broke out at Cobb Farms. Fortunately, no horses were hurt, but Stanley Jasper Cobb, Jr (“Junior”) is found dead in the charred remains of the stables…with a horseshoe-shaped indentation on the side of his skull.

The State Fire Marshal’s investigation is inconclusive, but the local sheriff thinks the fire was set to cover up a murder. Was Junior kicked in the head while leading the horses to safety? ….. or was it murder?

It is now the eve of the Derby, and everyone is gathered for the traditional “Derby Dinner.” Everyone is there -- from Junior’s grieving widow to the track steward. After a perfunctory moment of silence, the talk at every table turns to speculation about the circumstances of Junior’s demise.

Why would anyone have done it? Could it be…

….and who had those motives?

Mint julips for everyone! Hats on!