Just across the Line! 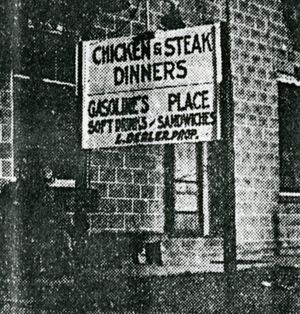 By all reports, there were not many patrons in the roadhouse Gas's Place that hot early Friday morning, August 1st, 1930 in Trevor Wisconsin. It was a place for chicken and steak dinners, soft drinks and sandwiches all served up from the large kitchen in the rear of the hall. Pop was the official drink of the day. Prohibition the law of the day. Salem resident, Charles Bugador, had, for some time, been sitting with four women friends, all of Chicago, listening to the two color musicians from Chicago - Solomon Turner on the banjo and John Erby on the piano - and ordering drinks from newly hired bartender, Edward Dennesty, a black man from Racine. There were a few scattered individuals and Derler's wife to round out the inhabitants.

About midnight, two couples drove up and took a table. After asking about "Gas" of the bartender and finding that he wasnt in the building, they ordered their ginger-ales.  They produced their own liquor bottles to go with their ordered ginger-ales and enjoyed the entertainment of the hall and conversation at their table. Each couple took a turn dancing to the music. And one of the men, surprisingly, sang songs in German. As time continued, both men removed their jackets and enjoyed their evening/early morning in shirtsleeves.

After Louis "Gasoline" Derler's return, Gas, 45, approached the table several times in conversation in his role as tavern owner. If they didn't know him, certainly they asked about his nickname - said to have come from his yearly purchase of the newest model car! It was later that one of the men at the couple's table stood and walked over to talk with Derler near the bar. It did not take much time before most folks in the hall could tell that there was trouble brewing. The musicians both took their leave to another rear room.  Bugador moved near and made an attempt to defuse the situation and to break up the shoving and pushing of Derler but the other man from the couple's table hit him in the head with a revolver and he immediately fell unconscious. Quickly, Bugador's four female friends scurried to hide in a rear room, while the other two women from the couple's table worked their way out to their automobile, leaving a woman's tam, a cigarette pack with two pills, and part of a man's neck collar on the table.

Two shots and Derler was dead on the dance floor. 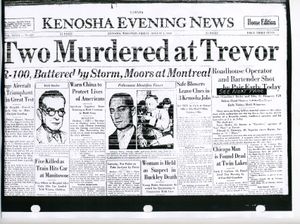 About this moment, Dennesty, retreated from the bar to a washroom where he was searched out and another two shots (later confirmed as one shot) and he too, was dead. Shot. Apparently, because he was a witness.

The time was 3am. And, it was still hot.

There has been no report of where Derler's wife, Louise, was when this was happening tho it is suspect that she had returned to their home adjacent to the tavern to be with their sleeping children - Alvina 14, Catherine 12 and Frank 4.  There was a claim that there were two revolvers involved, tho another report states two automatics. Shortly afterwards, the sheriff was called by the Wilmot Operator which was where the Telephone Company in Salem Township and Trevor originated.

By late Friday evening, the Coroner and District Attorney Morris Barnett had held their inquest and prevailed on the then Governor Walter J Kohler at Madison to offer a reward of $500 in an attempt to help locate the murderers. Simultaneously, three County officials continued pursuing investigations. By Monday, the Governor had made the offer of a reward of $500 for the arrest and conviction of each of the murderers. It was his first such offer since he had taken office. As a result, thousands of circulars were distributed nationwide to peace officers.  It made no difference. 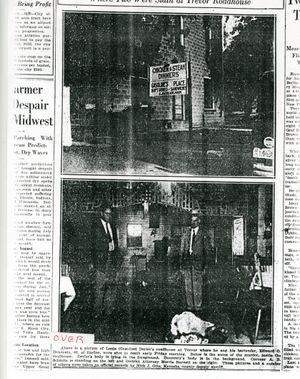 The building remains, about 100 years old, and it has continued to be a roadhouse or tavern. From the time its first brick was laid at its location on Railroad Street (258th Court) and First Street (114th), Lot 4 in Section 3 of the original Trevor Plat, it has seen, and felt, the constant and regular streaming of locomotives and rail cars to and from Chicago and heard the loud and regular blaring horn or steam whistle announcements before and after the crossing of HWY C. On several occasions sheep walked to and from the yards to the farms along HWY C, kicking up dust that most certainly found its way into the tavern. And so too, wagons pulled by horses and the latest model automobiles passed the corner.

In 1910, it was called  Baethke's Dancehall - pronounced as "BETkey" and was either newly built or newly remodeled from frame to a brick building. It is presumed that Baethke built the dancehall to compliment his older Baethke Hotel that was only two lots north. Eventually, the hotel was owned by the Bertha and Charlie Oetting family and was no longer linked to the dancehall.

The building has received neighborhood patrons, travelers before they walked to the depot to wait for their train, transient workers and dealers, sellers and buyers at the Trevor yards or attending Wisconsin Horse and Dairy Cattle Auction affairs. The auctions began February 7th 1930 with the sale of 150 horses. In the first 8 months, 4,252 dairy cows had been sold for 69 consignors and at one time noted as the largest dairy cattle and horse auction in the USA.

There was a blacksmith shop a short distance away run by Fred Forester Sr, the Trevor Store and Post Office at the 'triangle' corner, a few taverns within walking distance, a bowling alley a block away and the Trevor Social Club a stone's throw out the back door. The building has been the venue of roller rink parties on the wide open second floor sponsored by traveling entertainment groups who rented out skates and music for a short time before they continued onward to other destinations. The establishment of a year-round roller-rink in nearby Twin Lakes made this less practical.  It has been a tavern, dancehall, meeting place, funeral luncheon and dinners venue, and a place for holiday parties - Christmas and Halloween and New Year's, birthday and anniversary parties in addition to the daily visitors and patrons. Gasoline and Louise Derler  prepared 150 chicken dinners on Wednesdays and Sundays for diners.  Long ago, the main floor was structured into two large public rooms - the bar area for the men and a salon or Ladies Room where the women were served their drinks separate from the men.  Over time, a small apartment has been added to the rear of the building.

The Oetting's used the hotel down the street as a two flat apartment building. One of the last families to live there (1952-1987) was the Garrett Family ~ Truman and Marion ~ upstairs. Marion was a teacher at Trevor Grade School and at other Western Kenosha Schools. The hotel location is marked today by a large maple tree planted by the Oetting family when the hotel was torn down about 1987.

It is not known who Gas Derler actually purchased the tavern from or exactly when. It is a fact, based on Ruby Carey's census recording, that he had been in the USA for 28 years arriving in 1902 from Austria at about 8 years old and was in Wisconsin for 5 years by 1930. He likely did not purchase the tavern until at least about 1925 which was about when he purchased the home immediately north. Family states that he first purchased the home and then made the tavern purchase. He called the tavern a HOTEL on the census and had funds of $6,000. His parents were both Austrian but he could read and write English and it has been said that he could also speak German. He married when he was 38 and his wife Louise was 20. Her father was from Austria and her mother, Illinois and she, herself, was born in Illinois in 1891. All of her kids except young Frank who was born in Wisconsin, were born in Illinois.

After Gas's murder, it was operated for a time by his wife, Louise until she sold it. The house, remained in the family. Since that time, the tavern building has been owned by several people - the Gureczny family as Lil's or Lil and Ed's in the 1960's, Doc Ryan's by the Ryan Family, the Stork Club which had a neon light of a stork in front, Charlie and Marguerita Ade (lived in the Idler Home on Wisconsin Street (260th Avenue), Iggys ~ after owner Ignatius, Kate Blossie and her husband, a short-lived Italian eatery and most recently as Eldorado's by Sylvia Kubis. There may be others to add to this list.

There has been talk of this being a gangster job, a job by Capone's men enforcing the mob rules and tied to a possible private activity by Derler in liquor deals and slot machine rackets independent of 'alliances' to the Chicago Liquor Association or the Chicago Slot Machine Association. There is one investigator's view that the exhibit of people spending several leisurely hours at the scene of the anticipated crime does not fit the profile typical of gangsters of the day. Still today, there is the belief that Capone had a hand in the murders. Another view is that the friendship of the Derler's to the Bugsy Moran group may have played a part in the event. And that Moran  friendship could have irritated Al Capone who may have 'claimed' the Trevor area because he had 'a place' over on Voltz Lake - right around the corner! 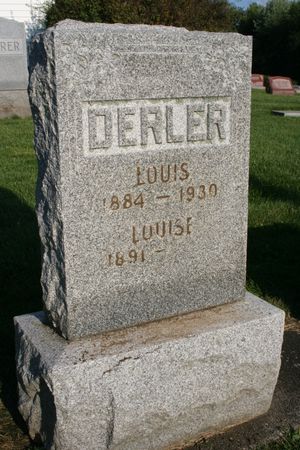 To date, 77 years later, the crime has not been solved and the true reason for the murders not uncovered. Louis "Gasoline" Derler was buried from Strang in Antioch and is buried near the main pathway in Liberty Cemetery next to his wife who later married Lawrence "Larry" Astrop of Trevor.

Comes along September 15th 2007. And the Derler name again appears as an owner. ~ Derler~ coupled with another long time Trevor name ~ Corduan. The building is, again, given a new name ~ Towne Square ~ and the anticipation of a successful tavern and gathering place grows.    Yes, grand children and great-grandchildren of Louis Derler are changing and promoting their new business with the nostalgia of knowing that their family elders once walked the floors, leaned on the bar, sat on the stools, enjoyed company of patrons and attempted to grow their livelihoods. They all take turns mentioning Gas Derler as if he is part of the new enterprise, mention the murders of long ago and bring to the forefront that they have history in this building as well as they are making history in this building. They are picking up where Gasoline left off 77 years ago!

Pictures from the first live broadcast of "The Kane Shadow: The 'Gas' Derler Murder Mystery", September 24, 2011 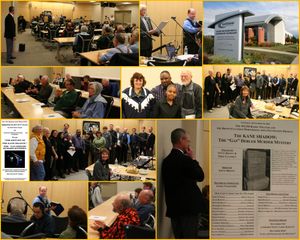 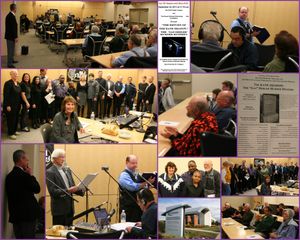 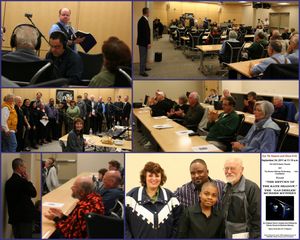