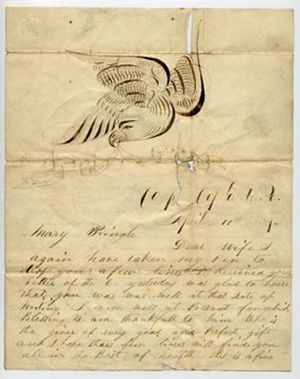 In 1950, the long-forgotten Civil War letters of Mary Luke Pringle, her husband, Philip W. Pringle, and other family members written from 1859 -1865, were discovered in a shoe box in the attic of the home of Frank Wicksʼ grandparents in South Fork, Pennsylvania.  Wicksʼ father, Frank Wicks, Sr., began to transcribe the letters and Wicks continued the work after his father’s death.  Wicks transformed the letters into a play, weaving the story of one family through the events of the Civil War.
“I was struck from the beginning by the emotional content of the letters,” Wicks said.  “They were filled with conflicts, complicated relationships, humor, and struggles for survival.  I felt that the energy of the letters, plus their historical importance, would make for an interesting dramatic presentation.”
The play is performed as reader’s theatre by five actors playing eight different characters using minimal sets, lights and costumes.  Soldier, Come Home has been presented by professional and amateur theatre companies, high schools and colleges, historical societies, community and senior centers, and Civil War Round Tables.  The play runs approximately one hour with no intermission.  Soldier, Come Home has been playing to sold-out houses since its premiere performance in Brunswick, Maine in 2002.  The play has been performed throughout the Northeast, including an Off-Broadway presentation in New York City.  For the opening performance, critics said, “Soldier, Come Home played to enraptured audiences.  The script, plus the acting, staging, lighting and music produced an amazing, intimate view of history.  This is a theater experience not to be missed.”

Learn more about Frank Wicks, this wonderful play, and performances around the country at civilwarplay.com.

The reader's theater play that brings to life the letters sent between members of a family during the Civil War.  Written by Frank Wicks and performed at and broadcast from the Civil war Museum of Kenosha on September 22, 2012

This marquee advertised the production of "Soldier, Come Home" presented by the Gem Players in Etowah, Tennessee in May, 2012.  Steve Brown attended the performance.