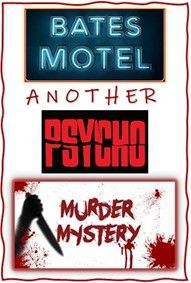 Norman Bates, recently released from prison, was found dead outside of Room 1 at the Bates Motel on the old highway. Who wanted him dead...The sheriff? The sheriff’s wife? The sister? Marion’s boyfriend? The wife of the private investigator? The psychiatrist? ...and why...Revenge? Friendship? Business deals? Anger? Money? Everyone in Fairvale is talking about it! Join them! BOOK NOW! THESE DINNERS SELL OUT FAST!